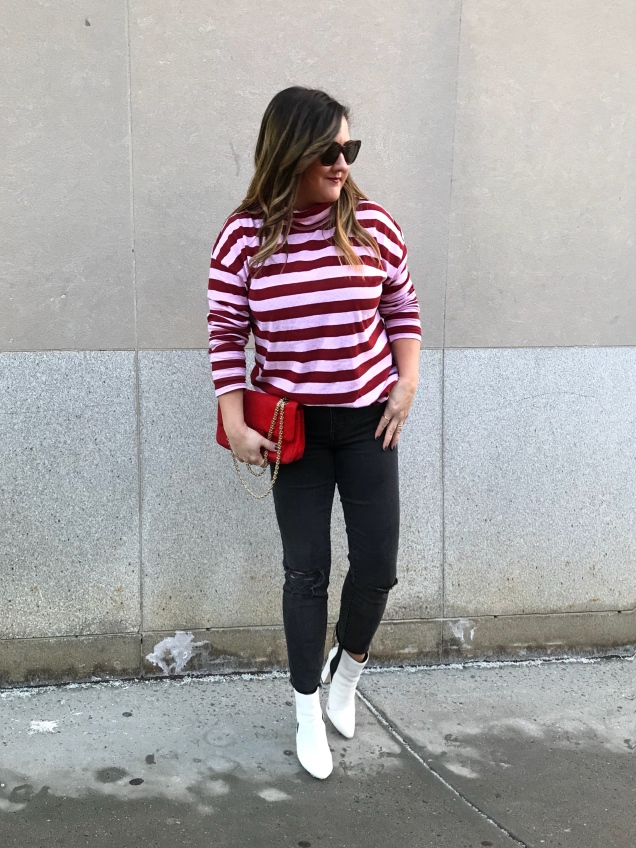 If you’ve been following me for awhile, and read my previous motherhood posts, you know that I was never a person who dreamed of becoming a mother. When we played house when I was a kid, I usually was more interested in creating the stories surrounding what we would be DOING with our baby dolls rather than actually taking care of or holding them (would we be turning the couch into an airplane to go on a trip? Or what was the best way to create a restaurant in the basement in order to serve our stuffed animals plastic play food?). So when we had Nolan, ALMOST TWO YEARS AGO, I was nervous to see if I had ANY maternal instinct at all— I’m a full time teacher after all, but I teacher older kids— and I never was one to want to hold babies or play with them or whatever it was that you DID do with them! Luckily, (or maybe naturally) it turns out that I do like being a mom— the instinct or whatever we want to call it, did kick in… and transition to motherhood really has not been all that difficult.

Because we struck baby gold.

Now, before I continue, let me preface this by saying that I already feel guilty saying that— Nolan is and always has been SUCH AN EASY BABY— little of which we can really take credit for… yes, Tim and I are easygoing people for the most part, and decided early on that Nolan would have to fit into OUR lives, not the other way around (hey, we were here first, right?!)… but I definitely think that he really was just born with a chill personality. He slept through the night at about 2-3 months old, and still sleeps straight from 8am -8pm. I think I’ve heard him cry a total of 5 times over the past 20 months. He’s independent, plays by himself and doesn’t whine. He eats pretty well, and cleans up after himself. I swear guys, I’m not bragging… it’s just the way he is.

Which brings me to the point of this post.

Inevitably, after your baby turns one, people want to know when you’re having “number two” (the middle schooler in me who never grew up is laughing REALLY hard at “number two”!!!). And the first thing that pops into my mind is that saying “One is like none and two is like ten” (or something like that)… life is SO good right now; or little trio is so easy to manage (but don’t get me wrong, it’s not like every single moment is perfect lol… Nolan of course has his moments!), we love to randomly pick up and go on impromptu adventures… and I’m TERRIFIED that a second baby will change that.

What if “second baby” is nothing like Nolan… what if he or she is colicky or demanding or cries all the time or doesn’t sleep or has (god forbid) health issues?! Please don’t mistake this last sentence for me seeming bratty or spoiled — I am well aware that many couples struggle with way worse concerns like infertility or have children with real, actual health challenges, and OF COURSE I know how lucky I am to have gotten pregnant and had a healthy child to begin with… but isn’t it natural for all of us to have these worries? I didn’t seem to have these same apprehensions before having Nolan because I had literally no clue what to expect… now that I know how good it can be I’m so afraid that it will never be as good as this… As they say, lightning never strikes twice in the same place, right?

As I write this, the logical part of my brain is already trying to reason with my emotional side— it’s telling me how I’ll adapt no matter what, how I’ll love “second baby” just as much, how he or she will be special in their own way, how we’ll figure out how a family of four will work the same way we figured out how to make it work with one baby. Moms of many, you’re prob rolling your eyes at this post, but maybe, a teeny part of you remembers having these same fears before you had “number two”?

So that’s where I am when it comes to having another baby. I know it will all be ok, as pretty much everything if life always is. Please comment and let me know what you think— who feels the same way? Any words of advice? Let me know!

Working on channeling this privilege into real change; how about you? Every interaction is an opportunity for improvement and progress- so instead of retreating into our comfort zones, let’s all have one REAL, non-social media- interaction today that moves the collective mindset FORWARD- a tough conversation with a loved one or social group, a positive interaction with a person who does not benefit from #whiteprivilege , letting them know that you stand with #blacklivesmatter #letsmakeprogress ✌️✌🏼✌🏿✌🏻✌🏾
A student of mine once described her experience to me like this: “When white people see us, they assume the worst and are surprised at our best”. Her words accurately sum up the mentality of fear, toxic assumption, and quiet oppression that work as constant barriers to progress. Let’s get over that fear right now. The fear of self-reflection, fear of change, fear of speaking up, fear of being ostracized from your peers because you choose to speak up against racism. No more fear. Work. Learn. Speak up. Listen. Expose yourself to discomfort. I stand with you. 🖤 #blacklivesmatter “Do not fear the opportunity to do better”- words by @ijeomaoluo (Just ordered her book #SoYouWanttoTalkAboutRace ; I encourage you to do the same!) . photo by @cristarockphoto
Tangible ways to action on my stories- I encourage you to do the same🖤 #blackouttuesday #bethechange #mutedandlistening
<artwork cred: @ohhappydani > The good news is: it’s never too late to UNLEARN behaviors and replace them with new ones, EDUCATE yourself and your family, OPEN your heart to change, and make conscious choices to SPEAK UP against both implicit and explicit racism, even if it feels uncomfortable- because a moment of discomfort cannot be compared with a lifetime and existence filled with anxiety, fear, and oppression. #blacklivesmatter #bethechange #justiceforgeorgefloyd
Our book nook- one of my fave spots in the house📚 - I’d like to think our book collection accurately sums me up: part Shakespeare-lover, part Tina Fey’s #bossypants , part #harrypotter fan , part #freakonomics -nerd; Tim’s high school journals where he confessed to “liking me” (💘😉), #ToKillaMockingbird - the first book I taught as an English teacher, and my grandma’s first edition of #ATreeGrowsinBrooklyn — our books are like old friends who’ve followed us from apt to apt, from house to house- happy to find a home on the cutest cozy bookshelf🧡 #booknook #rainbowbooks #rainbowbookshelf #booklover . http://liketk.it/2PGUh #liketkit @liketoknow.it
Tried to get Nolan (and Eamon😂) to recreate the log-balancing scene from #DirtyDancing with me on our hike yesterday - how’d we do?!😏 #nobodyputsbabyinthecorner #boymomadventures #mdw2020 . http://liketk.it/2Pxa1 #liketkit @liketoknow.it
If you want to hang with us, you’ve gotta love the beach😏🌊 HAPPY LONG WEEKEND GUYS- make sure you get yourself some sunshine and fresh air!🤍 #beachbaby #longbeachny #threemonthsold #mdw2020 . http://liketk.it/2PpCp #liketkit @liketoknow.it
Some baked #bananabread , most joined #tiktok , many made #dalgonacoffee - I tried Birkenstocks for the first time😂 AND I LOVE THEM👍🏼☁️ #quarantinethings #birkenstockarizona