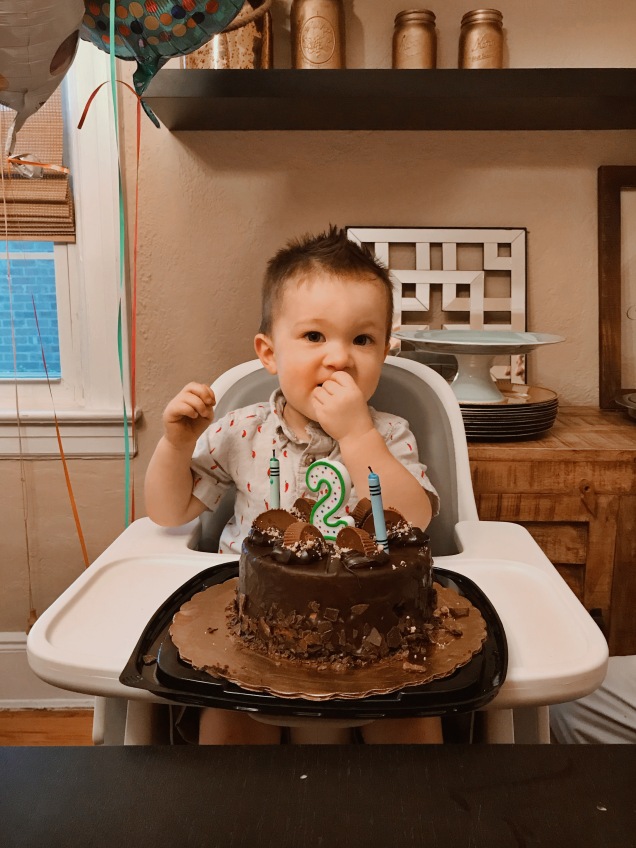 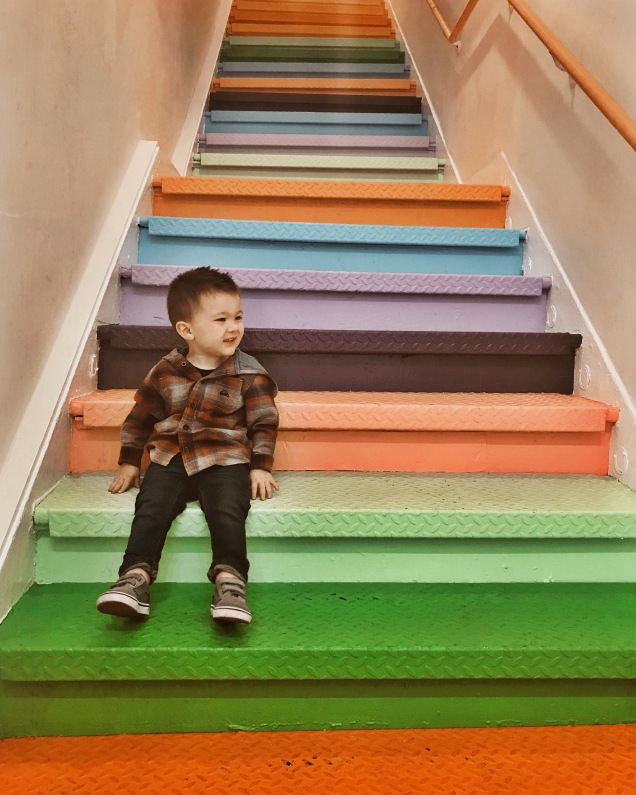 May is a special (and very busy!) month for us: Mother’s day, my birthday, it’s the end of the school year (if you’re a teacher you know how crazy it gets this time of year!) and of course — Nolan’s birthday! Last week, my little guy turned two- and as cliche as it sounds, I cannot believe how fast the past two years have flown by! Some wise pieces of advice/ words of wisdom that have really proved true: you’re never “ready” for changes- so just go with them; and that every “stage” of parenthood is special and fun in its own way- while presenting its own set of challenges! If you’re curious about what Nolan is up to at two, READ ON:

1. Overall behavior: I mean, he was a really good baby. We lucked out. So as two started approaching, I started thinking oh crap is this when he’ll inevitably turn into a head spinning demon child?! Has he been laying in wait, secretly fooling us and plotting our demise?! The answer turns out to be … not really, for he most part. Again, we’re only two weeks into two years old (lol) so the sh*t still has plenty of time to hit the fan- but overall, he’s still a pretty easygoing, chill, good tempered little guy- I’d say 80% if the time. Of course the other 20% includes a meltdown every now and again (today, for example- we went to the beach and I attempted to shower him at the outdoor shower before we left and he SCREAMED BLOODY MURDER and people looked at us like I was hurting him or something!) His personal preferences are obviously stronger and more apparent now- “I don’t want it/ I don’t want to” are regular statements we deal with- but I try and just chalk it up to the fact that he’s A LITTLE HUMAN and as a human myself who at times “doesn’t want it/ doesn’t want to” (get up for work, wait in line at the post office, make dinner, do laundry).  We try and let him “choose” or give him the allusion of “power” in making some decisions (what toy to bring, what snack to eat, if he wants to come with one of us or stay home)… but some non-negotiables are saying hello and goodbye to people, cleaning up after yourself, and obvi safety directions like holding hands when crossing the street.

2. Eating: I’ve been saying to my mama friends- if Nolan being a picky eater is the one “problem” I have to deal with, then I’m pretty lucky. At times, I totally envy parents who say “my toddler eats ANYTHING!” Or “he or she eats whatever we eat!”- I wish it were that easy for us, but alas, we have a picky eater on our hands. Things Nolan LOVES  and will definitely eat and give no pushback are:

chicken meatballs (fave brand is Aidelis from the supermarket)

sausage patties (so healthy, I know!)

quesadilla (cheese, won’t eat it them if there’s stuff in there!)

(we also still give him those squeezable veggie pouches which he loves- his faves are “green” veggie ones like the kale/spinach/broccoli variety… some say those delay real veggie eating but I don’t care bc at least he’s getting the National value!)

So it’s not like he eats NOTHING, he just doesn’t have a huge appetite and pretty much cycles through the items on this list, even though we try and introduce new foods all the time.

Another thing with the eating: does anyone else’s kid eat better when being read to or distracted in some way? We hardly ever let him eat meals in front of a screen (tv or iPad)- bc we don’t want to encourage mindless eating and want mealtimes to be social- so since he was a baby, we always read books/ mags while feeding him… now it’s getting hard to break that habit! He’ll pretty much always request a book with dinner.. which I know isn’t the worst   Thing in the world, but sometimes I want to eat with him without reading  Thomas the freakin tank Engine!!!

3. Sleep- I’ll keep this one short, bc Nolan’s sleep patterns have always been solid- he hasn’t woke up in the night since maybe 2 months old lol… and I count my lucky stars every night! Bedtime is anywhere between 745 and 815, depending if we’re out or not. He wakes up around 730-830 in the morning, again depending on what we did yesterday and if he napped or not. Nap time is usually around 130-330 or 230 to 430 (I can hear him singing “twinkle twinkle “ to himself up there as I type this!)… he LOVES to sleep and usually will request a nap or to go to bed at night. He still takes a night time bottle of milk- which every doctor currently advises against – but I don’t really care! He loves it, it gives him comfort- and we honestly treat him like a bigger kid so much of the time and expect so much of him already (in terms of behavior etc bc he was always “ready” for more”- that I figure let him be a baby his one way a little longer!

4. Potty: we’ve successfully had three poops in the trainer potty – and that’s about it. We try and ask him around the times when we think he normally goes, if he has to go potty- it’s really hit or miss. Especially bc I work ful tome and I’m not home with him during the day-it’s been hard to get a consistent routine for potty training. This summer, while we’re off- that’s the next thing on the list to tackle!

5. Social skills/ clingyness: not sure what to call this area… but you guys know what I mean! Currently, Nolan is full time with Tim’s mom during the week while we work… he’s the only kid there, so he’s not around other kids THAT much, although we do our best to take him to kids classes (gym , art etc)… honestly, he’s around adults mostly… let’s just say he’s an expert at brunch already!! Next fall, he’ll be at “school” two or three days a week, so I’m looking forward to him being there for social reasons.  Other than that, he’s really not very shy or clingy … he’ll pretty much talk to anyone, give hugs or high fives to anyone— acclimates to new situations very quickly… sometimes I wish he was more of a “mamas boy!” Sometimes he’ll just walk away from me and not look back when we get to a new place (which breaks my heart!) , but I’m also proud of his confident little self as well!

so that’s it for now!

hope this was interesting and maybe helpful to other parents out there- I know I always find it interesting to see what other kids the same age are up to!